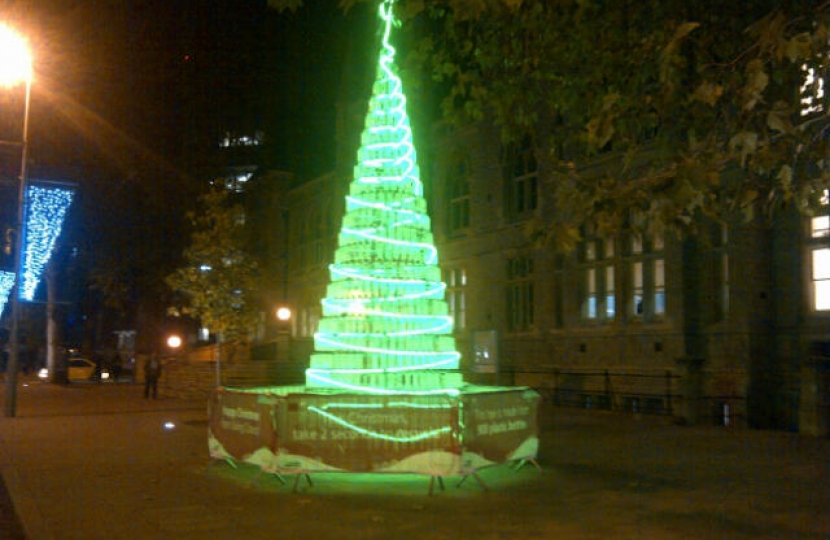 Ealing Council unveiled a very expensive Christmas tree this year without telling anyone what it cost. Local Hobbayne Cllr Colm Costello had to do some digging to find out the cost to the Council Taxpayer.

Cllr Costello had this to say, "When I saw the tree one night from a distance, I really liked it. The closer i got to it, the less I liked it. I wondered how much it cost so I wrote to the executive director for the environment who told me it cost £12,961.00, but that it was made from 900 recycled bottles and it was hoped this would make people think about recycling.

You could have knocked me over with just one of those bottles when I heard the cost". Perivale Cllr Justin Anderson was equally unimpressed. "This looks like a desperate attempt by this Labour run Council to get people to start recycling. If you want to incentivise people to recycle, you probably shouldn't charge them £40 a year to recycle their garden waste. Ever since that charge was introduced, recycling has barely increased, in fact in the first year of the charge, it reduced".

Northolt Mandeville Cllr Eileen Harris did not think much of the cost either. "How can we close vital services to vulnerable people in the borough and then spend £13,000.00 on a Christmas tree. It reflects badly on all of us. I'm just glad they didn't park the tree in Northolt".

It looks like this tree is not going down well in Ealing North.