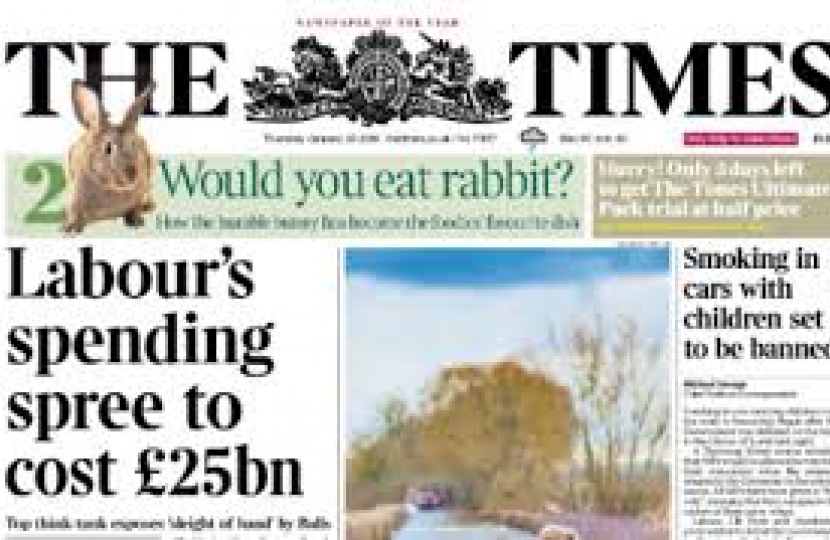 So now we know.

Over the last few days, Ed Balls has been trying to claim that Labour 'will not duck the hard choices ahead'. They said they were serious about the economy.

But now we know that isn't true.

Analysis by the independent Institute for Fiscal Studies has shown that Labour are planning to borrow and spend billions more.

The front page of yesterday's Times put the cost of Labour's secret spending spree at an extra £25bn a year.

And today, official Treasury numbers have shown the full impact of Labour's plans: a borrowing bombshell adding an additional £166bn to the country's debt in just one parliament.

Labour's plan to borrow and spend more is the single biggest risk to our economic recovery.

And it's hardworking people who would pay the price, with higher taxes funding this latest Labour spending spree.

The Institute for Fiscal Studies says that the living standards squeeze has now ‘probably come to a halt’.

As the Institute for Fiscal Studies make clear, Labour’s Great Recession – the worst in a century – has ‘had a large impact’ on hardworking families’ living standards. And while times are still tough for many people, it’s welcome that the IFS say the fall in incomes has now ‘probably come to a halt’.

To secure a better future for Britain, we have put in a place a long-term economic plan – cutting the deficit, cutting taxes, creating jobs, capping welfare and delivering the best schools and skills young people need to get on.  As we cut the deficit, the IFS have confirmed that the richest households are contributing the most.

Only by continuing to work through our long-term plan will we ensure a more financially secure future for hardworking people, their children and grandchildren. But if we abandon this plan and go back to Labour’s policy of spending more, borrowing more and taxing more – that would put the recovery, jobs and the British people’s future security at risk.

When you get the chance to vote Conservative, take it because if you don't, you get Labour.